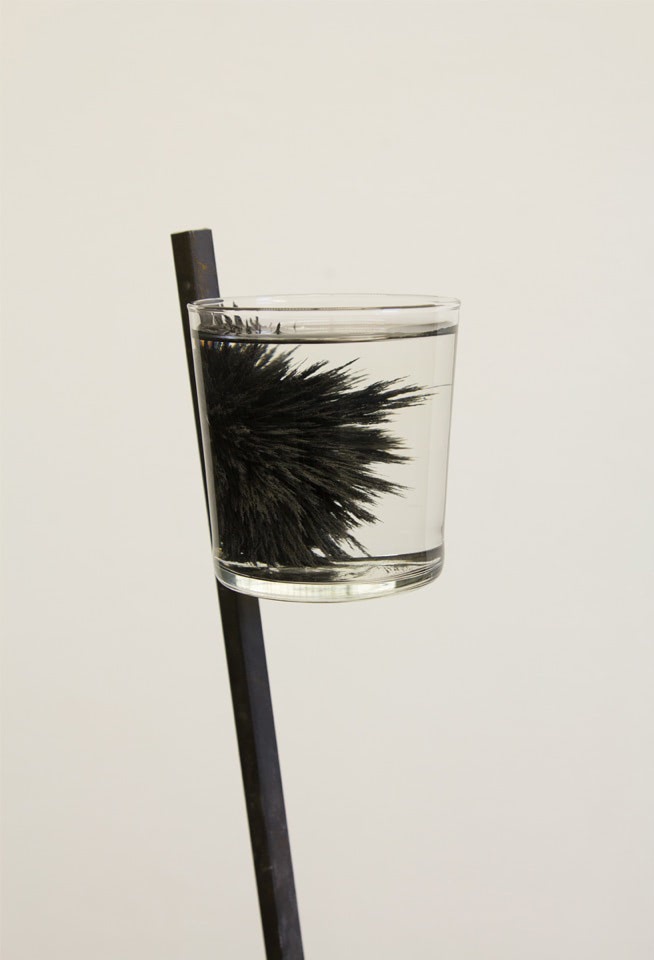 Science tries to create a sense of truth, art of uncertainty. The artistic process of Pablo Capitán del Río (Granada, 1982) gradually takes shape of some of the relational paradigms situated between the scientific and the poetic territory, drawing possible narratives regarding different physical and psychological phenomenon due to the construction of elements in their assembly.

Between the dense and the transparent, the hidden and the manifest, the intertwined and the inextricable, Pablo Capitan’s work approaches with his pieces a broad spectrum of possibilities and realities to become in the future. Time appears here as an important common ground in the elaboration of all the exhibited pieces.

Time and space, geometry and movement, shape the elements that serve to the creation of images that go beyond the stadium of reality, with potential metaphors, short-circuited narratives and amplified relational devices that provoke in us a desire to discover the complexities of the world and the possibilities of perceiving and acting in a different way.

Double images, twin isomorphism, hermetic constructions, and materials in a continuum state of change, invite us to stroll around this permanent “vanitas”, a reflect of the human complexity that in the words of Prigogine “it is constituted of a plurality of times , connected with each other by subtle and multiple joints ”.

Double time and simultaneous. This is a Time where the narrative construction of the artwork is delegated to because of its intern participation in the transformation of the materials. Time as simultaneity, as past-present, in every one of the infinite times the artworks conclude through this process of infinite half-way points. Endless, without a beginning. The now-time, irrevocably and forever.

In this constant state of change is where the work of Pablo Capitán invites us to reflect on the possibilities of the future, about what is to come, in the next minutes, the following days, a day that will no longer be the future that you expected yesterday. Temporal parallax, mental aphasia in front of the scene, an explosion inside a glass of water.

Pablo Capitán studied Fine Arts in the University of Granada, his work has been exhibited in the Council Condes de Gabia of the city of Granada, at the independent space Combo in Cordoba, he has also presented his work in international contemporary art fairs, such as Just MADRID where he was awarded with the Just MAG Young Award in the fair’s last edition. Currently he is working in the artist residence of BILBAOARTE and preparing different artistic projects.