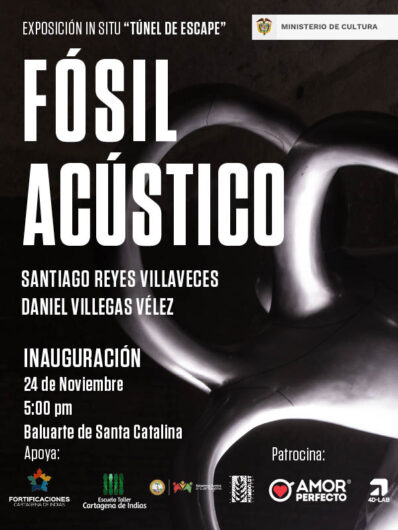 Baluarte de Santa Catalina, Cartagena de IndiasThe installation “Fósil acústico” by artist Santiago Reyes Villaveces and musicologist-philosopher Daniel Villegas Vélez, winners of the call for entries Túnel de Escape 2022transforms the exhibition space inside the walls of Cartagena into a resonance chamber – an immersive sound environment – assimilating the space inside the human ear to propose a reflection on listening and resonance as a means to rethink our collective relationship with our surroundings and the environment.

The location of the Baluarte de Santa Catalina facing the Caribbean Sea and the flooded soil of the Aljibe (the system of cisterns that supplied fresh water to colonial Cartagena) are dramatic reminders of the connection between coloniality and the contemporary climate crisis: the Anthropocene – the current era where human action produces global transformations at the geological level – began with the Spanish invasion, whose exploitation of the American continent was the primary fuel for the development of industrial capitalism. If the forecasts are correct, the sea level in the bay of Cartagena will rise by more than one meter in the next hundred years as a result of global warming, flooding not only the exhibition space but also vulnerable places such as La Boquilla and its surrounding mangroves. Thus, the Caribbean went from being a region of colonial exploitation to one of the first victims of the global transformations caused by the expansion of extractivist capitalism.

The central object of the installation is a sculptural reproduction of the inner ear, which is responsible for both our senses of balance, spatial orientation, and hearing. Through a system of loudspeakers, the sculpture emits a continuous sound (drone or drone) composed of synthesized sounds and field recordings from Cartagena, Ciénaga de Juan Polo, La Boquilla (taken from the section “listening territories” of the testimonial volume of the Final Report of the Truth Commission) and from the collection of environmental sounds (CSA) of the Humboldt Institute. After the possible disappearance of these ecosystems, such recordings will have become the acoustic fossils that give the facility its name.

In turn, the sculpture is an interactive interface that responds to touch and proximity, so that visitors can modify the sound characteristics of the environment in real time. In this interaction, new resonances, noises or silences arise unpredictably thanks to random functions and mathematical models similar to those used to measure the behavior of chaotic thermodynamic systems such as the atmosphere itself.

“Acoustic Fossil” seeks to foster reflections regarding the threats, challenges, responsibilities and possibilities of life in the Caribbean in the face of climate change from a perspective of environmental awareness emphasizing immersive and meditative modes of listening. How can we conceive of our place in a world where uncertainty about our actions coexists with the inevitability of their effects? How can we rethink our relationship with an environment in which we are not only external agents but also patients involved with the effects of our actions? What does it mean to live in an out-of-balance world? 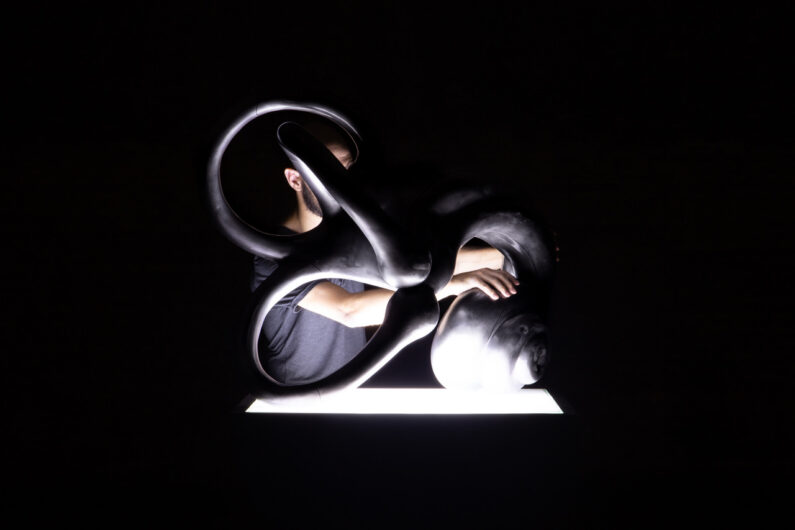